Dome of the Forgotten | Salt and Sanctuary Wiki

Dome of the Forgotten is a Location in Salt and Sanctuary. This temple-like area is accessed from both The Far Beach and the Red Hall of Cages, and it leads to the Ziggurat of Dust.

Dome of the Forgotten Map 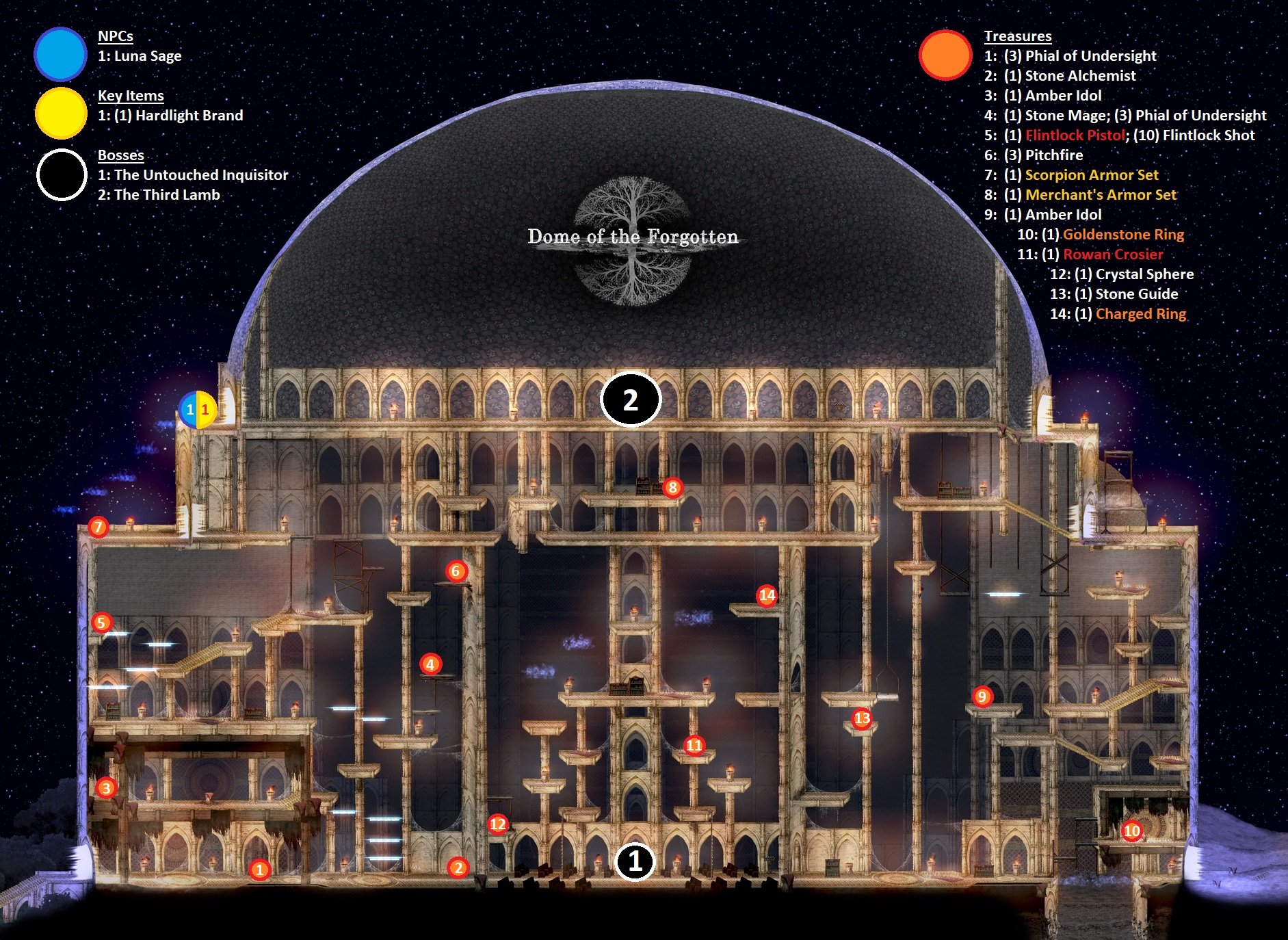 Full  Dome of the Forgotten Walkthrough

A full walkthrough including all the items, enemies and bosses goes here. You can add links, images. and other details.


Dome of the Forgotten is the thirteenth area you will encounter after having been to The Far Beach, and then made it here through either the Ruined Temple (long way) or just walking to your right from the Red Hall of Cages Sanctuary.

At the entrance you will find a pouch containing 3x

Phial of Undersight. To the right of it will be flashing ledges that appear and disappear. The chest at the end of the room is actually a Mimku, so be careful. Climb the ledges and head left on the floor just above to find the unclaimed Sanctuary. Claim it for the Creed of your choice by using their respetive idol. At the left-most end of the Sanctuary, you will find an

Head back out of the Sanctuary and continue upwards. On the right, on a wooden platform underneath a Hornet Steel is a

Go up the stairs and continue heading that way, making your way higher via the breaking wooden ledges that start to head to the left. If you head out the exit to the left, you'll find a chest with

Scorpion Dizcek. Head back to the right, into the Dome and jump over to the right side of the breaking wooden ledges. (Video)

Continue heading right, collecting the Merchant's armor set in a chest on a ledge, then drop down to face a large Armor Guardian, then jump to the ledge that goes down. Be sure to use a Phial of Undersight or the Undersight incantation before proceeding to the right to the wooden ledges, as you will be attacked by several more Whisperman. Jump onto the breaking wooden ledges and then hop over the flashing ones to their right. Keep going downwards when you hit the wall and you will eventually run into a Shrine. You can rest here and set it as a respawn point. You will also find a

From the Shrine, head left, jumping onto the floor below where there are a few more Whisperman and a Bronze Axe Knight. If you continue heading left, you will run into one of the bosses, The Untouched Inquisitor. He likes to attack using his bladed arms, but his attacks can be stopped if you attack him just as he is about to release his attack. For more tips & strategies on how to defeat this boss, see The Untouched Inquisitor page.

After defeating the boss, climb up the first ladder and jump over to the platform above it to collect a

Rowan Crosier. Now jump back down and go up the second ladder (to its left). Hop over to the ledge with a Crystal Sphere and a lever on it to open the caged gate below. This opens up a shortcut to the Sanctuary you claimed earlier. At this point you can go back to the Sanctuary to heal up and then come back here.

Come back to this room and go up the second ladder again (this will be the first ladder you see if you are returning from the side of the Sanctuary) and climb the ledges all the way to the top. Here you will find a

Bag of Salt, a Bronze Axe Knight and a few of Whispermen. To the right of these enemies will be another lever accompanied by an elevator that takes you up to the next area.  The item underneath it is a

Stone Guide. To the left, below this platform, is the Predator Heavy armour set. Drop down to the left, after picking up the guide to acquire this.

Head right at the top, out the exit, up the wooden scaffolding. Head left again back into the Dome. Here you will fight the second Boss of this area - The Third Lamb. This hippogriff uses Lightning based attacks and becomes more and more aggressive as the fight goes on. He is however weak to Fire and Arcane Damage. For more tips & strategies on how to defeat this boss, see The Third Lamb page.

After defeating the boss, head left and speak to Luna Sage. The Sage gives you the Hardlight Brand, that allows you to imbue your torch with a light allowing you to render blue arcane matter tangible. Then make your way back to the Sanctuary and head out to the right, back into the room where you fought The Untouched Inquisitor. Head up the second ladder (this will be the first ladder you see if you are returning from the side of the Sanctuary), and head all the way to the top. Just at the top platform, you will see a big firepit. Use your Hardlight Brand (by igniting your torch) to show the hidden blue platforms that you can now use to go higher. (Video)

At the very top-right you will find a

Dome of the Forgotten Video Walkthrough