Join VIP to remove all ads and videos

Cran's Pass is a Location in Salt and Sanctuary. Blocked off by specific Brands, Cran's Pass connects the Red Hall of Cages and The Ruined temple, breaching the breadth of the Island. 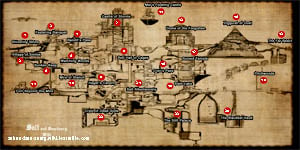 A full walkthrough including all the items, enemies and bosses is shown below. You can add links, images. and other details.

As you enter via the illusory wall, head right to find the Cran's Pass Sanctuary. This sanctuary is owned by The House of Splendor. This is one of the hidden Creeds that you will encounter, and can join if you "Take Oath" at the altar. *NOTE:* doing so will abandon your previous Creed and earn you a Sin, which prevents you from changing creeds again (among other consequences) until you clear the sin.

You must have the Redshift Brand and Hardlight Brand to proceed any further in this area. Head right from the sanctuary, and then use your torch to remove the red band, and then turn it off to walk through the smokey blue one. At the other end, use your torch again to reveal the ledge, and wall-jump over to the ledge above. To your right will be the area boss, Ronin Cran.

Ronin Cran , a once masterful knight, is an easy boss that is weak to all elemental damage. Using striking attacks with any elemental enchants is the most effective against him. For more tips & strategies on how to defeat this boss, see the Ronin Cran page. After defeating the boss, head right and jump up between the walls to reach a chest, which holds a

Twisted Heart. To the right of this chest, is the entrance to The Ruined Temple.

If you are playing a mage, and have not desecrated a sanctuary already, it is probably a good idea to go back to desecrate this sanctuary for the Blood-Stained Writ. If you defile it before beating the boss, you may wind up finding yourself completely without major healing potions as the mysterious cleric revives you outside of the sanctuary. Entering and staying inside of a desecrated sanctuary for longer than five seconds locks you inside until you either die or kill 3 waves of enemies consisting of a the current NPC, a Knight and a Mage and a Mounted Dread Horseman and a Mage.

NOTICE: If you have been following the guide you will be confused with the top info so I am putting this here. Ignore The Ruined Temple for now and head back to The Far Beach sanctuary. Follow the guide from there to complete the Ziggurat of Dust area.